US Congress explores opportunities in Sharjah 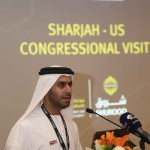 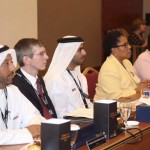 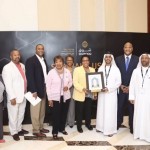 Shurooq welcomes high placed delegation at Sharjah Chamber of Commerce and Industry The Sharjah Investment and Development Authority (Shurooq) recently welcomed a delegation of representatives of the US Congress at a roundtable event hosted at the Sharjah Chamber of Commerce and Industry. The event formed part of a visit by the delegation to the United Arab Emirates (UAE) with the aim of participating in an educational and cultural exchange. The delegation, led by U.S. Congresswoman and Chairman of the Congressional Black Caucus, Rep. Marcia L. Fudge, was met by H.E Robert Waller, US Consul General to Dubai, HE Abdalla Sultan Al Owais, Chairman of the Sharjah Chamber of Commerce and Industry, and HE Marwan bin Jassim Al Sarkal, CEO of the Sharjah Investment and Development Authority (Shurooq), in addition to a number of Sharjah entities representatives. The roundtable aimed at familiarising the US delegation with the range of investment and business opportunities on offer in Sharjah and took an open discussion format. Speaking in his opening address, HE Marwan bin Jassim Al Sarkal, said, “The US and the UAE have enjoyed longstanding partnerships and cooperation in the areas of energy and infrastructure development, green build aerospace, defence security, media, tourism and culture, and, the two most burgeoning sectors within the region, medicine and education. The relationship between Sharjah and the US also deepened further with the recent signing of a Memorandum of Understanding between Shurooq and the U.S. Chamber of Commerce aimed at promoting investment, trade, technical and economic cooperation, enhancing export sanctions, and the exchange of visits made by trade delegations between the United States of America and emirate of Sharjah.” The Shurooq CEO went on to remark that the MoU had followed on the highly successful Sharjah USA Roadshow in October of last year, which saw the largest ever delegation of Sharjah based corporations, entities, organizations, and government departments make their way to the States – representing more than 20 separate entities. Al Sarkal further emphasised the strong economic foundations of the relationship between the UAE and the US. According to recent figures issued by the American government, the UAE is one of the fastest growing trade partners of the USA. Total bilateral trade between the two countries has grown from about $ 4.5 billion in 2002 to $ 24.8 billion in 2012. In the first nine months of last year, the total value of trade between the UAE and the USA rose by 12.5 per cent to $20,56 billion (AED75.46 billion), compared with $18.27 billion (AED67.05 billion) in the first nine months in 2012. Elaborating on the various factors that make Sharjah a highly attractive investment destination, the Shurooq CEO remarked on the solid fundamentals in place, such as the absence of taxes, 100% repatriation of profits, its stable economy, and the excellent infrastructure it already has in place. He further pointed out that Sharjah the manufacturing heart of the UAE, with one third of the UAE’s total manufacturing activities taking place in Sharjah. “Sharjah has the most diversified economy in the Emirates, with no single sector contributing more than 20% of the Emirate’s GDP, meaning that it is excellently positioned as a strategic financial hub,” Al Sarkal remarked. During the course of the roundtable discussion the US Congress delegates made use of the opportunity to clarify a number of issues, with a number of topics being raised, including the sustainability of the Emirate’s zero taxation policy and the availability, cost effectiveness, and skill level of labour. Commenting on the human resource pool available in the UAE, Dr Nada Mourtada Sabbah, Vice Chancellor for Development and Alumni Affairs at the American University of Sharjah (AUS) pointed out that the educational sector in Sharjah had grown exponentially since the inception of the UAE. She remarked that where there had not been a single tertiary educational institution present in the UAE when the Emirates were first established, the country now has a thriving and well-respected tertiary education sector, with Sharjah occupying a leading role in this regard. She accredited the immense strides that the emirate of Sharjah has made in education to the wise leadership of His Highness Sheikh Dr Sultan bin Muhammad Al Qasimi, Member of the Supreme Council and Ruler of Sharjah, who is himself an avid scholar. Dr Nada went on to state that thanks to the high quality of education available in Sharjah, the Emirate had no shortage of skilled, qualified, and highly able individuals available for both local and foreign companies to choose from. The viability of establishing American business interests in Sharjah also came up for discussion, with regards to which HE Abdalla Sultan Al Owais, commented that not only does Sharjah offer a range of highly attractive incentives and excellent possibilities within its free zones, but also remarked that US business ventures are as a rule very well received in Sharjah and the UAE. He remarked that the people of Sharjah already have a high level of trust in American products and business methods, which translates into favourable conditions both in terms of find investment ventures and a solid customer base for products and services. The Sharjah Investment and Development Authority (Shurooq) has signed a Memorandum of Understanding (MoU) with the Export-Import Bank of the U.S. (Ex-Im Bank) in April 2014 with the aim of promoting increased cooperation and serving their common objectives. Established in 2009, Shurooq strives to encourage investment in the emirate of Sharjah by adopting the best international standards in order to provide quality services that help attract investors from the region and the world. Shurooq's key mission is to provide facilities and incentives to help overcome obstacles facing investment activities in the emirate, to evaluate tourism and investment related infrastructure projects, and to lay down the necessary plans to complete such projects.
Back to media
Share this article: Twitter