“This is a golden period for fostering India–UAE trade relationships” 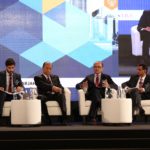 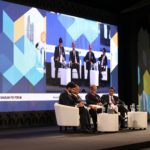 The very first panel on day 2 at the Sharjah FDI Forum 2016 taken up by one of the most important economic discourses in this part of the world The fact that ‘Growing trade links between India and the UAE’, was the theme of the very first panel discussion of the second day at the Sharjah FDI Forum 2016, underscores how important this issue is to not only the two countries in question, but also to big investors, financial experts and business leaders from around the world. Chaired by three Indian panelists, namely, Paras Shahdadpuri, Chairman, Nikai Group of Companies; C.S. Raghavan, Chief Representative GCC, Middle East and West Asia Region, Confederation of Indian Industry (CII); and Sudesh Aggarwal, Chairman, India Trade & Exhibition Centre, ME; the session shared why India is one of UAE’s biggest investors and Sharjah’s largest, and the steps that can be taken to further intensify this reciprocal relationship, which has been immensely profitable for both countries dating back thousands of years. Paras Shahdadpuri, who has been running Nikai’s UAE operations for over 30 years out of Sharjah, said that there is tremendous opportunity for both India and Sharjah to further capitalise on FDI collaborations, considering they are already making significant strides in the sector. He said, “Big marketing activities such as this Sharjah FDI Forum, will catapult more economic interests in the region, increasing FDIs.” “India’s FDI exports account for about USD 30 billion a year. Sharjah needs to establish strategies and mechanisms to be able to attract a good piece of India’s FDI pie. Indians invested almost USD 50 billion in businesses in the UAE. Of the 15,000 companies which operate out of the Sharjah FZEs, about 7,000 are owned and controlled by Indian investors. With about USD 20 billion pumped in property and real estate investments in the past four years, India’s FDI statistics in the UAE are staggeringly high,” he added. Sudesh Aggarwal highlighted how the strategic location of the two countries helped his business flourish in the UAE. “46% of the UAE’s SMEs are based out of Sharjah due to their ports, robust infrastructural support, considerably lower establishment costs and minimal regulatory hassles,” he said. C.S. Raghavan discussed how the CII has and continues to build competitiveness for the Indian industries, bringing them up to global standards in terms of quality, by putting into place international manufacturing protocols and investing in human resource development. He also said how the establishment of free zones (FZEs), like Dubai Internet City, Jebel Ali in Dubai and the Sharjah International Airport Free Zone and Hamriyah Free Zone in Sharjah, especially in the past 20 years, has only provided more impetus for Indian businesses to be set up in this part of the world. With a 2.6 million Indian diasporas in the UAE, of which approximately 300,000 are business owners, the numbers only increase. This is due to the bonds of trust and mutual cooperation between the two countries and opens doors to a golden period for the India–UAE relationship. The two-day Sharjah FDI Forum 2016 was organised under the patronage of His Highness Sheikh Dr. Sultan bin Muhammad Al Qasimi, Member of the Supreme Council and Ruler of Sharjah; by Sharjah Investment and Development Authority (Shurooq) in collaboration with the UK’s Financial Times and the fDi Magazine, at the Jawaher Al Jawaher Reception and Convention Centre. Her Excellency Sheikha Bodour bint Sultan Al Qasimi, Chairperson of Shurooq, was spotted in attendance.
Back to media
Share this article: Twitter