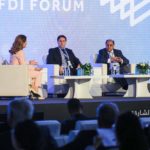 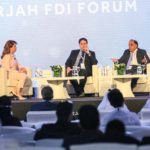 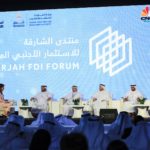 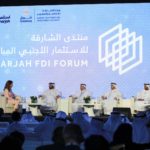 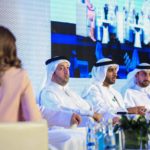 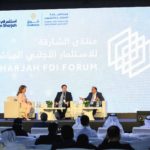 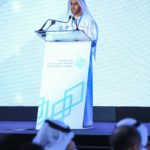 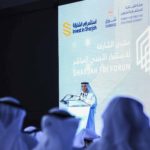 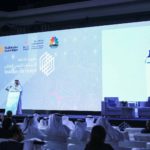 Sharjah FDI 2017 wrapped up its agenda yesterday (Wednesday) with panel discussions on business startups and the economy and an interview on the UAE’s forthcoming Value Added Tax (VAT) imposition. Themed ‘The Fourth Industrial Revolution,’ the two-day global investment forum was held under the patronage of His Highness Dr. Sheikh Sultan bin Muhammad Al Qasimi, Supreme Council Member Ruler of Sharjah.

More than 1,500 corporate business leaders, public sector representatives and government officials from the region and beyond attended the forum to find out about the latest trends and developments affecting the future of investment in the UAE, with the numbers participating a significant increase on last year’s event.

Starting the discussion, moderator Mohamed from CNBC Arabiya, the co-host of the event spoke of how he started his career with a start-up when he could have worked for a much larger and more established organisation: “I am standing before you now because I chose to take a position with a smaller company. The man that was to become my boss told me that I would learn much more and grow far more quickly with a dynamic operation that was going places. I took his advice and have never looked back. Start-ups can accelerate your career growth,” he said.

Commenting on Sharjah’s efforts to inculcate a culture of entrepreneurship, Najla Al Midfa said: “Shera’a (Sharjah Entrepreneurship Centre) was started with the aim of encouraging graduates to think about becoming entrepreneurs as opposed to taking the traditional employment route with a UAE public sector company or a large private sector organisation. We are striving to build an entrepreneurial system and to date have been very successful – there are 10 start-up businesses that now exist as a result of this enterprise.”

Countering a suggestion that access to funds was the main obstacle for start-ups, Jassim Mohamed Al Bastaki said: “The main problem isn’t one of funds its one of trust. Customers need to have faith in the product or service and buy it regardless – if they are dissatisfied they can give feedback but they should at least buy it in the first place. Only that way can start-ups grow and develop. Ultimately this attitude benefits the economy.”

Following on from the discussion was an interview dedicated to the imminent arrival of VAT in the UAE. Two leading taxation experts gave their opinion that despite UAE Government help, many businesses are ‘panicking’ and will not make the January 1, 2018 deadline.

“The government has done a fantastic job in trying to assist again and again, but we are just 100 days away from this tax and I would estimate that only 40% of businesses are ready. Some companies have made a lot of effort, but because there has been a tax free environment for so long, there is a certain ambivalence – ‘we’ll worry about it in January’, which is obviously not workable,” said Gurdeep Singh Randhay, Director and Head of Tax at Grant Thornton.

Alongside Mr Randhay, Marc Collonette, Indirect Tax Manager for Deloitte Middle East said that while every eligible business must be registered for VAT, the costs will not necessarily be passed on to customers: “Individual businesses must decide whether they want to absorb some of those charges to make them more competitive and while there are certain sectors that will be exempt, such as healthcare and education the decisions ultimately lie with the businesses themselves. The Ministry of Finance has covered many, many sessions to help companies set up the VAT changes, and these adjustments should already have been in place, but to a large extent they are not, despite the fact that 90% of VAT law around the world is the same – it’s generic.”

The final panel discussion of the Sharjah FDI Forum featured Sharjah government body representatives who discussed the future of the economy for Sharjah and how an entrepreneurial mindset allied to a culture of nurturing SMEs was the future for the emirate.

Closing the third edition of the Sharjah FDI Forum, His Excellency Marwan bin Jassim Al Sarkal, CEO of Shurooq, outlined the three takeaways he had gleaned from the conference; firstly that every country can be globally competitive thanks to the transformative changes that The Fourth Industrial Revolution was throwing up, secondly that to benefit fully from these changes countries need to develop regulations with the regulatory framework best established  in partnership with the private sector and thirdly, that Sharjah takes very seriously the issue of The Fourth Industrial Revolution and was ready to capitalise on what is a rapidly changing industrial landscape.

“Sharjah is ready to embrace the future and the future is contained within The Fourth Industrial Revolution. We look forward to working with our partners across the UAE - both in the private sector and public sphere - to create the right environment for businesses to take off and thrive in this new and exciting landscape,” he said.

Taking place at the Jawaher Reception and Convention Centre, Sharjah the third edition of the Sharjah FDI Forum was organised by Sharjah Investment and Development Authority (Shurooq) and Sharjah FDI Office (Invest in Sharjah), in conjunction with CNBC Arabia.