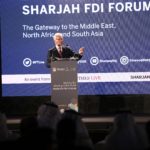 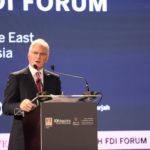 An opening keynote on day 2 of the Sharjah FDI Forum 2016 that puts much in perspective for the need of future diversification of the UAE economy The resounding success of the first day of Sharjah FDI Forum 2016 led to visitors and participants trickle in even earlier on day 2. With seats at the Jawaher Al Jawaher Reception and Convention Centre occupied by over 300 elite decision makers, business leaders and economic experts, the second day got off to a strong start with an opening keynote by Dr Nasser Saidi, President, Nasser Saidi & Associates, Member of Regional Advisory Group for MENA, IMF. Starting with instances of most parts of the developed world becoming oil sufficient and resorting to renewable sources of energy, Dr Nasser Saidi delivered the opening keynote titled, ‘UAE – prospects and challenges of a non-oil economic development paradigm.’ As nations have progressed on their COP21 commitments, reducing their overall carbon footprint and devising technologies to conserve in batteries and other storehouses, most countries in the world are making continuous strides in building a sustainable development model, where future generations can benefit from the conservation of non-renewable energy sources. It is, thus, time for the UAE and rest of GCC to diversify their markets, reducing dependence on what has been for years the primary driver of their economies – oil. He said, “The oil price tsunami that has hit the oil rich countries over the past few years is a welcome shock as it will help the UAE and Sharjah diversify into new economic models, leveraging their powerful infrastructure, logistics and existing assets to make demographically-driven investments like building smart cities, focus on retail and consumer products, tourism, hotels and hospitality, further urbanisation efforts, knowledge-based and digital innovations, healthcare, telecom, etc. The shift from primary dependence on oil to fuel our economies is both beneficial and necessary because the prospects to build on a new future for the UAE are very promising.” Dr Saidi stressed on the fact that UAE, with its land, air and sea interconnectedness, already operates on a multi-dimensional integrated infrastructure, and should make these readily accessible to prospective investors from around the world to setup businesses in our region. Additionally, our governments should increase their revenue by creating effective strategies to that reduce the drain of the nation’s wealth – subsidies on water and petroleum, for instance. The private sector needs to grow considerably and create more jobs. He made interesting observations on key areas of diversification and innovation, which are underway in the UAE, saying, “A remarkable achievement has been the announcement of the UAE space programme, which is working to launch a drone to planet Mars in the year 202. We need to create a space centre here dedicated to conduction the UAE’s economic activities of the future.” Dr Nasser Saidi put forth several recommendations worth looking into for future diversification of the UAE economy, and suggested significant reforms that would drive these efforts. He noted that the global shift toward renewable energy raises a significant opportunity for the UAE to become the first global financing hub for clean energy. He suggested developing a knowledge-based economy, aggressive digital innovations, the use of nanotechnology, financial technology or fintech, and introducing a rigorous STEM curriculum for the nation’s youth at the primary levels itself. He went on to propose some crucial reforms that will fuel Sharjah’s and the UAE’s diversification efforts. He remarked, “A green card programme, like the one Saudi Arabia is deliberating to launch, must be considered by the UAE. Our economies should definitely be investing more on R&D programmes, putting into place incubators and accelerators. The UAE should develop to establish itself as the intellectual property hub of the Arab world, because in many ways it already is. We need to liberalise our telecom and insurance sectors, make them more conducive to future FDIs. Modern insolvency laws must be chalked out to assist businesspersons to restructure their businesses, and pension and social security programmes started.” In concluding his deeply insightful address, Dr Nasser Saidi said that Sharjah must continue their focus on education to become the hub for STEM training and eventually move towards establishing a digitally-driven economy. He also urged for a greater integration between all the emirates of the UAE – collaborating to avoid wasting the nation’s valuable resources and providing foreign investors seamless experiences as they set up and operate their businesses. Signing off on a positive note, he said, “The UAE, and Sharjah in particular, should be at the forefront of the post-oil economic diversification enterprise, as it is already more diversified and better equipped than the rest of the GCC, thus having a better framework for making the required adjustments.” This two-day Sharjah FDI Forum 2016 has been organised under the patronage of His Highness Sheikh Dr. Sultan bin Muhammad Al Qasimi, Member of the Supreme Council and Ruler of Sharjah; organised by Sharjah Investment and Development Authority (Shurooq) in collaboration with the UK’s Financial Times and the fDi Magazine.
Back to media
Share this article: Twitter