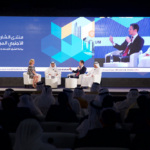 Under a rapidly-changing environment taking financial, economic, political and social systems by storm, the world stands on the brink of a fourth industrial revolution. Its potential impact is being billed by many experts as unparalleled on industries and production, as well as human perspectives in every sphere of their personal and professional lives.

In a bid to keep pace with such changes in the future, the Sharjah FDI Forum 2017 will address a range of key topics on the economy and investment and the direct impact of the Fourth Industrial Revolution on enhancing international competitiveness through adopting the most advanced technologies and contemporary trends. Themed ‘The Fourth Industrial Revolution’, the prestigious economic event is held under the patronage of His Highness Sheikh Dr. Sultan bin Muhammad Al Qasimi, Member of the Supreme Council Ruler of Sharjah on 19-20 September 2017 in Sharjah.

Throughout history, we find that the world has had certain key revolutions that have shaped production, bringing higher levels of development, progress and prosperity. The first industrial revolution in the 18th century was driven by coal and steam, followed by the second 100 years later, by electricity, and finally the third, in the 1960s, led by the invention of computers, known as the digital revolution.

However, The Fourth Industrial Revolution is unlike anything humankind has ever experienced before, in terms of its scale, scope, speed and complexity. According to Professor Klaus Schwab, Founder and Executive Chairman of the World Economic Forum and author of ‘The Fourth Industrial Revolution’, there are key technological drivers for this revolution, including artificial intelligence, robotics, autonomous vehicles, 3d printing, big data, virtual currencies, the internet of things, nanotechnology, biotechnology, energy storage, materials science and quantum computing.

The beginning of the 21st century saw the early shoots of The Fourth Industrial Revolution, especially with the unlimited access to knowledge on the internet, mobile devices, unprecedented processing power and storage capacity.

The Fourth Industrial Revolution is characterised by three key factors that distinguish it from previous revolutions. The first is speed and the level of complexity, the second is its integrated and comprehensive impact on all aspects of life and the third is the plurality of systems. This revolution is able to lead to a fundamental change in internal and external relations between countries, companies and communities.

Technology experts believe the connectivity pace between smart and digital devices will be unprecedented, with all aspects of life being automated through more than 50 billion connected devices.

Organised by the Sharjah Investment and Development Authority (Shurooq), and the Sharjah FDI Office (Invest in Sharjah), and in strategic partnership with CNBC Arabia, the Sharjah FDI Forum 2017 will host a discussion panel themed ‘The Fourth Industrial Revolution (4IR): Opportunities, Benefits and Challenges’ conducted by several international experts who will address key topics, features and drivers.

The panel will shed more light on the implementation of this revolution in the UAE, as well as the potential impact of artificial intelligence and robotics on our lives. The increase in the number of robots, in addition to the risks and advantages of human-robot interaction will also be addressed.

Also up for debate are the challenges and risks of automation, the excessive use of robots and artificial intelligence in jobs, and the importance of immediate transformation to smart cities. Other important topics include the necessary legislation and policies to ensure harmonisation and alignment with The Fourth Industrial Revolution and Sharjah’s potential sectors that can profit from it, contributing to the ‘UAE Fourth Industrial Revolution Council’.

On one hand, The Fourth Industrial Revolution will create new jobs such as 3D printing design and production, robotics and smart systems programming, while on the other, automation will replace some elements of the workforce. Millions of workers may be replaced by machines, such as drivers who will give way to automated and self-driving vehicles and low-skilled workers, who will be replaced by robots. The Sharjah FDI Forum 2017 will discuss the procedures to strike a precise balance between opportunities and threats.

The Future of the World:

HE Marwan bin Jassim Al Serkal, CEO of Shurooq, says: “The two previous editions of the Sharjah FDI Forum addressed a spectrum of crucial topics in the world of economics, including FDI flows, industry, SMEs and the knowledge economy. In this year’s edition, the forum will address yet another vital trend that will shape the future of the world.

“Given the gravity of The Fourth Industrial Revolution and its pivotal role in impacting investment trends, the forum seeks to highlight the direct impact on state economies, individual incomes and capital flow around the world.

“The challenges and opportunities of the Fourth Industrial Revolution require a thorough understanding and call for concerted efforts between the highest level government officials and corporate decision-makers with the aim of establishing joint values, standards and objectives.

“Although The Fourth Industrial Revolution is still in its early phases, the forum’s panels will feature a precise and detailed reading of its effects on the UAE and the Emirate of Sharjah, their current position and their capability to keep pace in the future,” he notes.

For his part, Mohammed Juma Al Musharrakh, Director of Invest in Sharjah, says: “Keeping pace with The Fourth Revolution has become fundamental for economies striving to reach a leading position in regional and global competitiveness. It is imperative for us to be prepared for this new era, and work harder to attain a standing that befits the status of the UAE and the Emirate of Sharjah on an international arena,” he stressed.

“Governments in general are required to issue legislation designed for The Fourth Industrial Revolution. The highest burden of innovation falls on corporates, firms and research institutions, while individuals contribute to the development of systems through feedback and development suggestions. In the end, this revolution will take place through joint collaboration between all parties, and we look forward to promoting the forum’s message among people in UAE, the region and the world,” he notes.

Set to take place at Al Jawaher Reception and Convention Centre in Sharjah, the Sharjah FDI Forum 2017 aims to explore joint visions on a range of topics about the future of the global economy, FDI realities, the impact of adopting new technologies and economic trends, such as the Fourth Industrial Revolution and ‘block chain’, on all sectors, and their impact on the labour force.

The forum features keynote presentations and panel discussions, conducted by a host of senior officials and experts, exchanging experience and knowledge, and debating the economic conditions and potential opportunities in the present and in the future.

The Sharjah FDI Forum 2017 is an invaluable opportunity to examine investment prospects in UAE in general and Sharjah in particular. It also promotes potential opportunities in Sharjah’s key economic sectors, in the presence of a host of decision-makers, officials and economic experts.