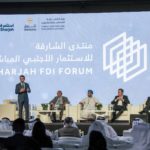 The UAE Undersecretary for Foreign Trade and Industry Affairs, Ministry of Economy, HE Abdullah bin Ahmed Al Saleh opened Day 2 of the Third Sharjah FDI Forum with promising remarks on the role foreign direct investments (FDIs) will play in fulfilling the SDG 2030’s vision, globally, saying that the UAE is both a global destination for and an exporter of FDI. Among other high-profile attendees were Sheikha Bodour bint Sultan Al Qasimi, Chairperson of Sharjah Investment and Development (Shurooq); HE Marwan bin Jassim Al Sarkal, CEO of Shurooq; and HE Mohamed Ali Rashed Alabbar, Founder and Chairman of Emaar Properties.

Observing how the UAE’s focus will remain with areas like innovation and technology, Al Saleh observed: “The UAE is investing heavily on R&D and public-private partnerships, which highlight a strong and vibrant national economy committed to increasing competitiveness at an international level.”

“The government must play a major role in the national march towards increasing our FDI attractiveness,” he said explaining that the UAE is planning to introduce effective programmes to support and encourage small and medium enterprises (SMEs) and mediate, and mediate the integration of big MNCs with SMEs.

A clear political and cultural vision that supports FDI’s role in development, flexible regulations, smart government services, protection from corruption, and allowing a free flow of capital, human resource, goods and services were among the essential components for FDI attractiveness the Undersecretary listed in his opening address.

Panel 1: Sustainability at the cost of profits?

“It is extremely important that modern corporates get over their obsession for profits. Good intentions never deliver results. The actions taken on ground to ensure sustainability do. Corporates need to work with a telescopic vision, which is far-reaching, and act with microscopic actions that do not miss out on the granular aspects that make the real difference,” said Dr. Khandelwal.

Air Arabia’s Group CEO presented an alternate argument, saying: “Profits are good for sustainability, for the environment, society and of course the stability of an economy. Profits in business will translate into more employment opportunities, higher standards of living, cleaner environment and so on.

Sustainability is a direct result of a healthy, profit making economies. Only good economies can protect our future. Do you think a poor country will care about cleaning their rivers?”

On the aspect of giving up on profits to ensure sustainable development, Mr. Al Yahmadi observed: “Usually businesses are not willing to compromise on profits to meet the larger national agenda that includes economic sustainability. This is where a company like ours comes in to bridge the gap between the government and private businesses as in most countries the former is unable to build lucrative cases for business. We build a business case and within it try to meet the national agenda as well as the objectives of a business.”

The role of the government in putting pressure on businesses to follow regulations that will ensure economic sustainability was emphasised, and the fact that the fourth industrial revolution being the first one to take into account the aspect of sustainability was highlighted.

“Ford has been based out of the Middle East since 2014, and has been carrying out its main operations out of Sharjah. We have seen that the high rate of youth unemployment in the region is one of the biggest hurdles to a sustainable economy here. To address this in our little way, we have put our philanthropic arm, Ford Foundation, in charge to help the youth find opportunities in entrepreneurship. We are working towards partnering with an educational institution here in Sharjah to be able to facilitate the same,” said Mr. Benslim.

The panels closed with remarks on the present being one of the most exciting times in history with respect to the world witnessing a paradigm shift in the way humankind is interacting with technology, and the need for responsible leadership, public-private engagement, the need to nurture and harness talent, and the willingness to embrace these developments were highlighted.

An interesting observation about CEOs in their mid-20s and an extremely agile and competitive generation of young leaders transforming the way the world engages in business and professional activities was made by the Emaar Properties Chairman. Sharing an important message in lighthearted moment with the attendees, he said: “They don’t live in the world of emails and CCs, and work at lightning speed. They turn things around in a matter of minutes. They wear sound diffusers, work from the edge of their desks and can talk about world politics and technology and their next holiday to Europe all at once. Are we heading towards a world where the wisdom of 55-year-olds will no longer be required to run nations or profitable businesses? Are we becoming redundant? It amazes me to see what these bright folks have achieved so young, and makes me hopeful about a brilliant future.”

Is technology a boon or a bane for the education system, and how education can benefit from digital innovations, especially since education is one of the seven sectors identified by the UAE in its economic diversification plans, were some aspects addressed by the panel.

“Education is one of the oldest global institutions in the world, an industry that is lagging behind compared to others with respect to adopting technological innovations. The fourth industrial revolution build on three revolutions, and the education system is yet to use the outcomes of the first three to its advantage. I call for a total transformation of the educational system, bridging the gap between students and the way current educational systems treat and teach them,” said Dr. Hoballah.

Speaking about the bridging this gap within the context of the skill set that future generations requires to keep pace with 4IR, and whether the current education system in the UAE addresses that, HE Al Mahmoudi said: “This is on the top of the emirate’s agenda, where His Highness Sheikh Dr. Sultan bin Muhammad Al Qasimi Supreme Council Member Ruler of Sharjah, has been leading us to bring in local R&D into the folds of education. This will all complement investments and business in Sharjah and be a platform on which the public and private will meet and benefit from one another. The government is preparing and launching young talent into local and global markets.”

“Today, the education system needs to integrate knowledge, leadership and passion. This is what will bring about the future generation’s capacity to think and act differently to the way we do. This is what I call the knowledge of differentiation. Education should not just be about producing degrees,” said Mr. Gupta.

Sirish Kumar added, saying: “Players like Telr.com look at the integration of education and technology from three angles. Learning should not be for the privileged lot only – it should be accessible to everyone in society. Digital learning should be part of this strategy. This must be part of schools, universities as well as corporations. Second, the way education is imparted must include educational programmes instead of just giving out incentives or bonuses to employees. Third, digital learning has the potential to be customised to specific needs and the potential to reach people outside classrooms. This needs to be used to everyone’s advantage.”

The panelists concluded saying that technologies like VR and AI will never replace educational institutions. They are not threats or substitutes, but value adds. These tools are going to enhance the lesson delivery experience and a student’s overall learning experience.

Organised by Sharjah Investment and Development Authority (Shurooq) and Sharjah FDI Office (Invest in Sharjah), the foreign investment promotion arm at the Authority, the two-day event is being held at Al Jawaher Reception & Convention Centre in Sharjah.

Themed “The 4th Industrial Revolution”, the Sharjah FDI Form 2017 - which is being conducted in a strategic partnership with CNBC Arabia – has brought together a galaxy of renowned decision makers, senior global businessmen and highly regarded experts from the public and private sectors, to review FDI prospects for the region.