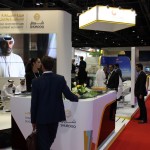 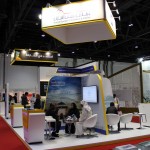 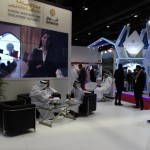 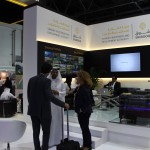 Four major Sharjah government entities join Shurooq’s stand at the meeting Dubai-United Arab Emirates, March 30th, 2015: Sharjah Investment Authority (Shurooq) is taking part at the 5th Annual Investment Meeting (AIM), held in Dubai this year from March 30thto April 1st, in participation with four major Sharjah government bodies; Hamriya Zone, Sharjah Airport Free Zone Authority (Saif Zone), Sharjah Economic Development Department and Sharjah Chamber of Commerce and Industry. The 11,000 delegates who were in attendance last year are testament to that billing – including 56 ministers and vice-ministers who participated, heading their own delegations from private and public sectors. In total, 122 countries – from Africa, Asia, the Americas, and Europe – are being representeth March d. The event is being held under the patronage of His Highness Sheikh Mohammed bin Rashid Al Maktoum, UAE Vice-President, Prime Minister and Ruler of Dubai. For the Sharjah Investment and Development Authority (Shurooq) – credited as the driving force behind the transformation of Sharjah – participation in the AIM is, therefore, crucial. His Excellency Marwan bin Jassim Al Sarkal , CEO of Shurooq, with participation of representatives from Hamriya Zone, Sharjah Airport Free Zone Authority (Saif Zone), Sharjah Economic Development Department and Sharjah Chamber of Commerce and Industry, will deliver a keynote welcome address at the session entitled “Sharjah Country Focus”, due to be held today ( Monday March 31) , in which he will focus on Sharjah’s strategy for attracting local and global investments, the investment environment and sustainable growth. His Excellency Al Sarkal is also one of the panelists at the session entitled “Incentives and asset-seeking FDI, the new rules of the game”, due to be held on Wednesday April 1, in which they will discuss recent developments in putting (fiscal) incentives in place for attracting higher value added activities, investor’s experience in identifying potential incentives for innovation driven FDI and the role governments play in this process. Joining him are : Mr. Martin Kaspar, Executive of Fränkische Industrial Pipes,Germany, Mr. Arnold Leung, CEO of Appnovtion Technologies, Canada, Mr. Andrea Goldstein, Senior Economist, Investment Division, OECD, France, and Mr. Kai Hammerich, President of KA Foreign Investment Corporation AB, Sweden Shurooq is attending this year not only as an exhibitor, but also as a silver sponsor of the meeting One of Shurooq’s key goals is to enhance Sharjah’s appeal as an investment, tourism, and business destination. The AIM is an important avenue through which elite investors, corporate and individual - both from the region and elsewhere in the world – will make informed decisions about their future investments. The theme of AIM 2015 is ‘Sustainable Development through FDI-Induced Innovation and Technology Transfer.’ Bringing together many of the world’s foremost academics, experts and practitioners to share ideas about the importance of innovation for growth and development, the event explores how foreign direct investment can contribute to sustainable economic growth through transfers of technology and supportive investment policies. These subjects are at the heart of what Shurooq does every day. The Authority sends delegations to roadshows and round-table meetings all over the world, to share knowledge, ideas, and technological advances with governmental and business leaders, and to explore avenues of collaboration, often by signing memorandums of understanding. It also proposes government policies that encourage investment into Sharjah, and creates optimal conditions for businesses operating in the emirate. HE Marwan bin Jassim Al Sarkal, CEO of Shurooq speaks passionately about the Authority’s participation in AIM 2015. “This year’s meeting focusses on essential subjects, from the promotion of innovation and technology transfer through FDI, to the creation of optimal investment regulatory frameworks across the world.” he said. He added, “As well as countries in every part of the world, a multitude of sectors are being represented at AIM 2015. This only increases the importance of the event for Shurooq, given that Sharjah is proud to have one of the most diversified economies in the entire region, with numerous attractive investment propositions.” HE Marwan bin Jassim Al Sarkal emphasised that Shurooq is taking the opportunity during AIM 2015 to forge new relationships and strengthen existing ones. It is partly this kind of pro-activeness and energy that has resulted in the Authority being named The Banking Awards 2013 winner and the 2014 FDI Agency of the Year in the MENA region. The growth in the appeal of Sharjah as an investment destination over recent years, underpinned by Shurooq, has certainly been remarkable. So much so, in fact, that Sharjah recently followed in the footsteps of some of the globe’s leading business hubs by becoming the first city in the Middle East to host the World Forum for Foreign Direct Investment.
Back to media
Share this article: Twitter