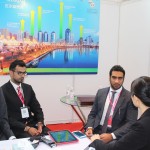 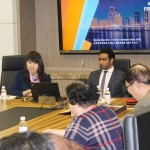 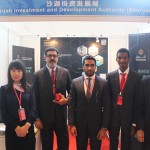 Shurooq successfully concludes five-day roadshow to Taiwan and Shanghai The Sharjah Investment and Development Authority (Shurooq) promoted Sharjah to investors from around the globe at the World’s Investment Summit, the culmination of a roadshow to Taiwan and Shanghai that took place from April 19-23. Shurooq, represented by Mohamed Al Musharrkh, Head of Investment Promotion, and Diana Yonghui MA, Investment Promotion Executive, joined on the roadshow by Sharjah Economic Development Department, represented by Saeed Al Mheiri; and Sharjah Healthcare City, represented by Binu G. Pisharadi, Manager of Commercial Affairs. The Authority began the five-day roadshow in Taiwan, where it met with the foremost Taiwanese bodies in sectors spanning trade, industry and commerce. Thereafter, the delegation travelled to Shanghai, the most populous city in China, to participate in the World’s Investment Summit, taking place over three days from April 21-13 at the China Financial Information Center. During its participation in the Summit, Shurooq gave a speech to attendees, showed a video about Sharjah, and delivered a detailed presentation highlighting investment opportunities and incentives in the Emirate, important sectors of the economy, the numerous projects the Authority has developed, and information about Sharjah’s burgeoning healthcare sector. Shurooq also played a leading role in a three-hour country business-to-business (B2B) seminar: the ‘Sharjah Shanghai Promotion Seminar’. Other forums Shurooq attended during the summit included one held under the theme: ‘International Investment under the New Normal: High Quality Bringing-in and Large Scale Going-out’, and another titled: ‘International Investment Environment, Projects and Services’. The World’s Investment Summit is attended annually by more than 300 investment service institutions and more than 10,000 individual participants. Among the attendees are investment service institutions, government investment agencies, project owners, and high net worth private investors, as well as enterprise managers and top level executives in all areas of the financial services industry. Mr Mohamed Al Musharrkh, Head of Investment Promotion, said: “This roadshow was an ideal opportunity to promote Sharjah’s unique offering as an investment destination to investors in the Far East – to build new relationships, and participate in one of the global calendar’s premier gatherings of investment experts. With bilateral trade between Sharjah and China – the world’s second largest economy – growing at a double digit rate and forecast to have surpassed AED 18 billion last year, we are seeing enormous scope to develop fruitful and mutually beneficial partnerships”. As well as participating in the World's Investment Summit, while in Shanghai Shurooq also conducted meetings with several of the city’s foremost business and investment organizations – including the China International Communication Association, the Shanghai Pilot Free Trade Zone United Development Co, and the Shanghai JWT Investment Management Co. Shurooq's key mission is to provide facilities and incentives to help overcome obstacles facing investment activities in Sharjah, evaluate investment-related infrastructure projects, and lay down the necessary plans to complete such projects. In recognition of its overall accomplishments, Shurooq was named The Banking Awards 2013 – and 2014 FDI Agency of the Year in the MENA region at the European’s Global Banking and Finance Awards.ds.
Back to media
Share this article: Twitter