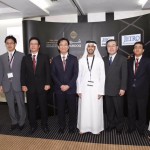 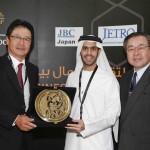 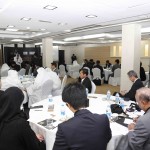 Sharjah-Japan Business Roundtable explores increased cooperation The Sharjah Investment and Development Authority (Shurooq), in collaboration with the Japan Business Council (JBC) and the Japan External Trade Organization (JETRO), recently hosted the Sharjah-Japan Business Roundtable, which took place on the 11th of November at Multaqa Al Qasba Conference and Meeting Hall in Sharjah. The event, which forms part of Shurooq’s strategy to increase business ties with countries across the globe and promote Sharjah as a leading business and investment destination in the international arena, was attended by HE Hisashi Michigami, Consul General of Japan in Dubai, Mr Yasuyuki Fujitani, Chairman of Japanese Business Council, HE Marwan bin Jassim Al Sarkal, Shurooq CEO, HE Khalid Jassim Al Midfa, Director General of the Sharjah Commerce and Tourism Development Authority, and representatives from Sharjah Environment Company (Beeah), Sharjah Electricity and Water Authority (SEWA), Sharjah Health Authority in addition to representatives from Japan, as well as members of the Japanese Business Council and the Japanese community in the UAE. HE Marwan bin Jassim Al Sarkal, CEO of Sharjah Investment and Development Authority (Shurooq), remarked: “The roundtable was an excellent opportunity to further strengthen our ties with the Japanese business community, especially in light of the highly successful visit by a delegation from the Japan External Trade Organization to Sharjah earlier this year. The groundwork for increased cooperation is already firmly in place and we are looking forward to seeing a number of highly successful ventures take form in the future.” The Shurooq CEO went on to emphasise that the relationship between Japan and the UAE is well established, pointing out that Japan was among the first countries to recognise the UAE upon the creation of the federation on December 2, 1971. During his welcome note HE Hisashi Michigami, Consul General of Japan in Dubai said: “I would like to thank HE Marwan Al Sarkal and Yasuyuki Fujitani for organising this valuable roundtable. Japan and the UAE have a long and close relationship, and this roundtable represents another milestone towards renewed prosperous trade. I will focus on finding ways to continue to strengthen this fruitful relationship between our two countries.” Yasuyuki Fujitani, Chairman of Japan Business Council in Dubai, said: "Sharjah is clearly one of our most important partners in The Middle East , and I truly hope that this business round table will develop our mutual relationship further, not only economically, but also from a social, cultural and personal perspective. Sharjah is currently growing its economy – and some JBC members, including Hino motors limited and Kobelco Cranes – have established their offices in Sharjah. Furthermore, Japan has been contributing to Sharjah’s economy by exporting mainly automobiles and related equipment, and ranks 2nd in Sharjah’s import statistics, only after India. It reached US$ 2.3 billion in 2013 – which is nearly 30 percent of the entire export amount from Japan to the UAE”. He also pointed out that 12 Japanese companies – including non-JBC companies – have offices in Sharjah. Shurooq made use of the opportunity to give an overview of the four key investment sectors in Sharjah that have been identified as areas of growth – travel and tourism, logistics, the environment, and healthcare, and to outline Sharjah’s economy and the investment opportunities in each of these sections through a presentation by Mohamed Juma Al Musharrkh, Head of Investment Promotion at Shurooq. An overview of Shurooq’s rapidly expanding and diverse portfolio of large-scale development projects was also presented during the roundtable. Shurooq was established in 2009 with the aim of achieving social, cultural, environmental and economic development on the basis of Sharjah's distinct Arab and Islamic identity, and to encourage investment by adopting the best international standards in providing quality services that help attract investors from the region and the world. Shurooq's key mission is to provide facilities and incentives to help overcome obstacles facing investment activities in the emirate, evaluate investment-related infrastructure projects, and lay down the necessary plans to complete such projects. In recognition of its overall accomplishments, Shurooq was named The Banking Awards 2013 – and 2014 FDI Agency of the Year in the MENA region, in the European’s Global Banking and Finance Awards.
Back to media
Share this article: Twitter