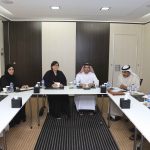 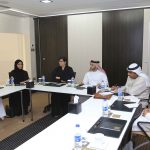 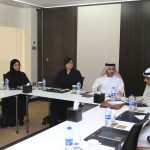 As part of its mission to protect Sharjah’s rich heritage, Sharjah Investment and Development Authority (Shurooq) hosted a meeting with Sharjah Antiquities Authority (SAA) and Sharjah Institute for Heritageand Sharjah Museums Department (SMD). The activity discussed effective ways to regulateand promote cultural preservation and followed Emiri Decree No. 5 of 2017issued by His Highness Sheikh Dr. Sultan Bin Muhammad Al Qasimi, Memberof the Supreme Council Ruler of Sharjah, which relates to the organisation and protection of cultural heritage in Sharjah.

The meeting was held at Shurooq's main office in Al Qasba, in the presence of HE Marwan Bin Jassim Al Sarkal, CEO of Shurooq,and HE Manal Ataya, Director General of SMD and Yousif Al Mutawa, Manager ofHeart of Sharjah.Also attending were Eissa Yousef, Director of the Department of Excavation and Archeological Sites at SAA; Asma Al Suwaidi, Acting Director of the Sharjah Institute for Heritage, and a number of section heads and department directors from the four concernedauthorities.

Exploring ways to organise and protect cultural heritage in Sharjah, the meeting reviewed its tangible and intangible heritage, as well asthe museum collections in the emirate. The representatives of the four local entities discussed ways to revive the various elements of the emirate's cultural heritage and to promote them locally, regionally and internationallyin a manner that reflects their value and contribution to humanity’s development.

HE Marwan Bin Jassim Al Sarkal said: "Our meeting is in line with the directives of the Emiri Decree, to identify developments undertaken by relevant authorities tasked with regulating and protecting the emirate's heritage, each within its area of influence."

Al Sarkal lauded the Emiri decree and its importance in developing Sharjah’s cultural and heritage landscape and in enhancingthe emirate’s archaeological assets.

"Since its inception, Shurooq has strived to preserve and protect the cultural heritage of the emirate of Sharjah. The authority has set numerous plans for the development and protection of its array of archaeological destinations and treasures that will allow interested people to visit them in a manner that increases their value. To achieve this goal, it has provided these sites with high-end facilities and services to attract visitors from the UAE and beyond in order to promote them on the world tourism map," he added.

H.E Manal Ataya, Director General of Sharjah Museums Department, said: “This decree has a significant impact on the success of our activities in Sharjah Museums Department. We are committed to preserving Sharjah’s diverse and rich cultural heritage across many disciplines and this will help us to develop that even more. It supports our goal of highlighting Sharjah's role in the development of the region and strengthens our vision to cement the emirate's reputation as a leading cultural centre not just across the Middle East but around the world.”

During the meeting the attendees addressed mechanisms of coordination between the competent authorities and the policies and strategies that need to be adopted to update cultural heritage legislation. They also examined restoration methodologies and issues around maintenance, conservation and transport to ensure the safeguarding of cultural heritage and its preservation for future generations. They discussed the need for administrative enforcement regulations to determine offences and penalties, as well as the need to coordinate with the competent authorities to ensure the provision of legal protection in compliance with UAE laws aimed at protecting cultural legacy.

Emphasising that Sharjah Institute for Heritage would play a prominent role in realising the objectives of Sheikh Sultan’s decree and turning them into actions on the ground,   Asma Al Suwaidi, Acting Director of the institute, said: “His Highness Sheikh Sultan’s decree concerning the organisation and protection of cultural heritage in Sharjah offers a clear action plan for the concerned authorities and reflects the emirate’s perceptive vision to maximise and safeguard its heritage treasures as an integral part of the evolution of human civilization.”

Shurooq’s meeting saw the distribution of responsibilities and tasks among the four concerned entities and the setting up of work teams assigned to examine ways of promoting the emirate’s cultural heritage, as well as studying mechanisms to update heritage-related laws and methodologies of scientific research.

Eissa Yousef, Director of Department of Excavation and Archeological Sites at SAA, said: “The decree emphasises the internationally-acclaimed status of the emirate of Sharjah on the global tourism map and gives a boost to Heart of Sharjah on the tentative list of the World Heritage Sites by the United Nations Educational, Scientific and Cultural Organization (UNESCO).It also strengthens Sharjah’s cultural scene and throws more light on the geographical, historical and cultural importance of the emirate, the UAE and the wider region.”

Sharjah is home to a number of heritage destinations and archaeological sites that stand as a testament to the early communities that inhabited the regionor who passed through it over the centuries in trade convoys.Among these sites isthe Mleiha Archeological and Eco-Tourism Project, which reflects the region's rich cultural and archeological heritage from as far back as the third millennium BC.

Another highlight of Sharjah’s significant cultural destinations is Heart of Sharjah, the largest heritage project of its kind in the region and one that is included in the tentative list of UNESCO’s World Heritage Sites.Shurooq is engaged in revitalising the traditional heritage area ofHeart of Sharjah and upgrading its infrastructure to transform it into a vibrant cultural destination. The project is deemed to have particular historical significance because it reflects Sharjah's authentic identity and its cultural, social and political heritage, as well as its thriving present. The project includesthe restoration ofhistorical buildings and the construction of new structures, including hotels, restaurants, cafes, art galleries and markets, museums, play areas and commercial offices.