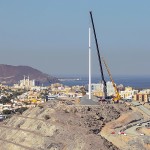 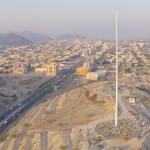 Hoisting the UAE’s flag off a 75-meter flagpole in Khorfakkan Consistent with its commitment to strengthening national identity and to foster national sense of belonging, and as part of the UAE’s 43rd National Day celebrations, the Sharjah Investment and Development Authority (Shurooq) is set to hoist the UAE’s flag off a giant flagpole in Khorfakkan on Tuesday, December 2, in what is considered a first of this scale National Day celebration in Khorfakkan. The initiative to raise the UAE’s flag off a 75-meter flagpole in celebration of the UAE’s National Day will be carried out by Shurooq for the second consecutive year, after the Authority celebrated the 42nd National Day with the UAE’s citizens and residents last year, hoisting the UAE’s flag in Al Dhaid, Kalba and Dibba Al Hisn, before turning this year to the City of Khorfakkan, which will be proud to fly the UAE’s flag high, in an expression of dignity and pride of this historical landmark day which served as a starting point for the nation’s current development, prosperity, and welfare. HE Marwan bin Jassim Al Sarkal, CEO of Shurooq, added: “Khorfakkan city marks National Day this year by inaugurating the Flag Square - Khorfakkanand raising the UAE’s flag high. Khorfakkan’s flagpole will be the fifth in a group of giant flagpoles in the emirate of Sharjah.” He affirmed that the Authority would spare no effort in strengthening national identity and celebrating the major milestones in the history of the UAE. Shurooq was established in 2009 with the aim of achieving social, cultural, environmental and economic development on the basis of Sharjah's distinct Arab and Islamic identity, and to encourage investment by adopting the best international standards in providing quality services that help attract investors from the region and the world. Shurooq's key mission is to provide facilities and incentives to help overcome obstacles facing investment activities in the emirate, evaluate investment-related infrastructure projects, and lay down the necessary plans to complete such projects. In recognition of its overall accomplishments, Shurooq was named The Banking Awards 2013 – and 2014 FDI Agency of the Year in the MENA region, in the European’s Global Banking and Finance Awards.
Back to media
Share this article: Twitter