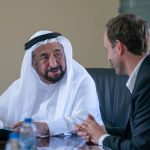 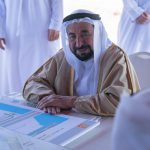 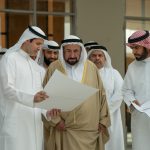 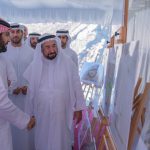 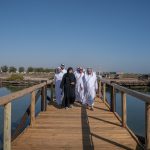 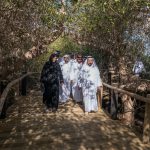 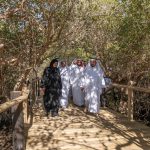 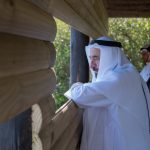 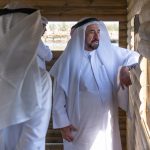 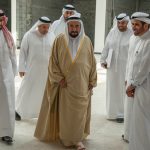 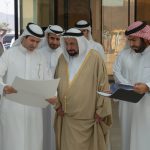 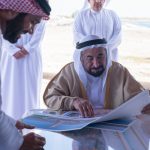 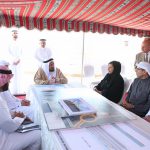 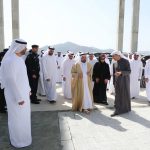 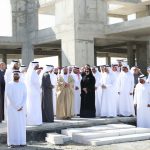 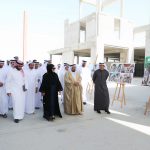 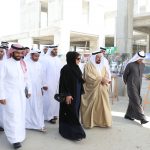 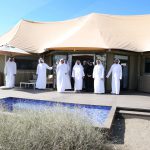 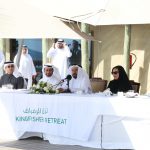 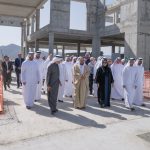 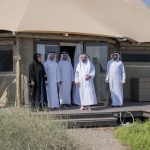 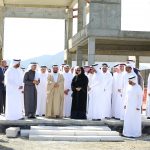 His Highness Sheikh Dr. Sultan bin Muhammad Al Qasimi, Member of the Supreme Council and Ruler of Sharjah, reaffirmed that the emirate of Sharjah is committed to executing key community and development projects in service of sustaining and growing its human capital with the best of care and wellbeing.

This came during a public speech by His Highness The Ruler of Sharjah after welcoming guests, dignitaries and city’s residents at the distinct Kingfisher Retreat, built in the midst of Kalba’s natural and environmental reserve.

His Highness Sheikh Dr. Sultan Al Qasimi also revealed that the emirate of Sharjah has assigned AED 5 billion aimed at the wide-ranging development of key growth and tourism projects in the city of Kalba, and AED 1 billion will concentrate at the development of the new “Sharjah – Kalba” road, slated to complete by end of this year, with the aim of providing the city’s residents and visitors efficient commuting time from 1.5 hours to 45 minutes.

He further revealed that approximately AED 3 billion will invested in the complete development of infrastructural projects as well as road networks, all slated for completion from early this year. Moreover, AED 2 billion will be allotted towards the city’s socially beneficial infrastructure developments all set to include scientific and cultural projects; thus creating new job opportunities to the city’s citizens and residents.

His Highness the Ruler of Sharjah has also unveiled the development of the Arab Region’s first of its kind sports sciences academy, which will be established in collaboration with the most prestigious international sports sciences universities and colleges. The new acamdey will feature courses majoring in physiology, nuturition, health and fitness studies, as well as providing certified degree towards fitness instructors.

One of the new projects approved by His Highness the Ruler of Sharjah in the city is the “Rawaq Kalba Corniche” project, stretching along the buildings across the corniche front, with a unique urban design symbolising the aesthetics and unique architectures which the emirate distinguishes itself for.

Upcoming projects to be launched at the city as stated by His Highness Sheikh Dr. Sultan Al Qasimi will include a retail project developed by the Sharjah Cooperative Society, where under his directives, Sharjah Cooperative Society will present their shares to residents and citizens of Kalba as well as sell free shares to citizens under humanitarian support to benefit from.

Concluding his speech, His Highness Sheikh Dr. Sultan Al Qasimi thanked all local authorities, businesses and entities involved for the development of these projects which serve the best interests of the city of Kalba.

His Highness The Ruler of Sharjah toured all new development projects under construction at the city, which includes the new Sharjah-Kalba Road project where he received a full brief on the 55km stretch starting from the intersection of Sheikh Khalifa Road passing through Wadi Al Helu area and ending at Kalba Corniche, saving significant time and commutting efforts for the people and visitors of Kalba city.

His Highness the Ruler of Sharjah visited Al Qurm Natural Reserve, which is considered one of the largest mangrove reserve in the region, serving as a refuge . Through its swamps, salt marshes, and mudflats, an environment, the reserve serves as a refuge for a wide range of rare avian and aquatic life. It includes the refuge of the endangered green sea turtles, who find Al Qurm Natural Reserve an ideal breeding ground by laying their eggs along the shores of the reserve’s mangroves.

During his visit, the Sharjah Ruler was introduced to the progress made on the AED 119 million Kalba Waterfront project, being developed as in partnership with Eagle Hills under Eagle Hills Sharjah Development. On schedule for a late 2020 opening, the project is 35 percent complete according to officials.

Boasting a total built-up area of 17,000 sqm, the Kalba Waterfront is positioned along the serene Kalba lagoon, and is being designed as a one-stop destination for shopping in a mall with 82 shops, dining with breath-taking natural views and a variety of entertainment including a Play Zone for children.

His Highness also visited the Kingfisher Retreat, a luxurious boutique eco-retreat Shurooq inaugurated last April. The retreat operates under the Sharjah Collection brand by Shurooq – a trio of ecotourism destinations that bring Sharjah’s vast natural diversity to UAE residents as well as tourists from around the world and is managed by ‘Mysk by Shaza’. On a tour of the property that is home to 20 luxury tents and located near Kalba’s protected mangrove reserve, the Sharjah Ruler learnt about the retreat’s world-class luxuries and services that include a restaurant, spa, and even business facilities.

The Kingfisher Retreat is part of the Kalba Eco-tourism Project and enables visitors to engage with Kalba’s unique natural habitat made up of magnificent nature and rare wildlife like, kingfisher birds, sea turtles and other reptiles.