Sharjah Accelerates US Investments into its Rapidly Diversifying Economy 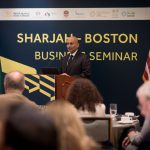 Latest in a series of Sharjah’s ongoing global networking efforts to showcase the strengths of its economy as a haven for foreign investors in a diversity of economic sectors, a high-level delegation from the emirate, led by Sheikh Fahim bin Sultan Al Qasimi, Chairman of Department of Government Relations of Sharjah, recently completed a visit to Boston, USA.

A business seminar, organised by the Sharjah FDI Office (Invest in Sharjah), also took place in the city, and provided strategic and personalised prospects to Boston-based investors in Sharjah’s unique and leading investment climate.

The delegation visit and program took place in light of recent developments between the UAE and Boston, where in 2016 it was announced that the UAE opened a Consulate General in Boston, Massachusetts – its third in the United States – to promote bilateral relationship and enhance US–UAE cooperation throughout New England.

Furthermore, in 2015, Massachusetts exported over US$150 million in merchandise and goods, making it the 21st largest exporting state to the United Arab Emirates, with the state also benefiting from UAE imports, with $17 million of goods imported during that same year.

According to a recent SelectUSA report, the UAE is the seventh fastest-growing source of foreign direct investment (FDI) in the United States. Emirati FDI in the US grew from $16,699 million in 2011 to $27,480 million in 2015. The top industries in the US for Emirati FDI are financial services, transportation, fossil fuels, communications and aerospace.

Organised by Invest in Sharjah, in partnership with the US–UAE Business Council, the “Sharjah–Boston Business Seminar”, took place on Tuesday (September 25), and brought together senior US-based investors to meet with six of the emirate’s government representatives at the Ritz-Carlton in Boston.

The seminar was attended by American and Emirati diplomats, high-level business officials, investors in Boston and US looking to expand their operations into the UAE’s fast-growing economy, and private businesses.

Attendees and participants were presented a key opportunity for both sides to identify areas of bilateral business interests and ways in which Invest in Sharjah and allied entities representing Sharjah’s government can help American businesses bring their commercial aspirations to the emirate and realise them in profitable and sustainable ways.

During his opening remarks, HE Salem Alshamsi said: “It’s truly an honor and an opportunistic occasion to have Sharjah in Boston, under a delegation led by Sheikh Fahim Al Qasimi, and explore market leading opportunities with Boston-based businesses and establishments.”

He added: “Technology, robotics, healthcare and construction are among the key interests and outbound investments Boston-based companies see in Sharjah. With leading establishments such as Optimus Ride, Greentownlabs and Mass Robotics, Boston has become a global city among the A.I. and Technological industries.”

He noted: “We will work closely with our counterparts from the public sector in Boston, and participate in the upcoming 4th Sharjah FDI Forum in December, and give them a more direct access to Sharjah’s upcoming economic strategies and the multiple prospects it offers in the future.”

Sheikh Fahim Al Qasimi, Chairman of the Department of Government relations in Sharjah said: “The long-standing political, and economic relationship between The United States of America and The United Arab Emirates is something that we have celebrated during this visit, this bilateral relationship is important to Sharjah, and we aim to continue, and highlight the important opportunities that exist in investment between our two cities”.

He continued: “With common values between Sharjah and Boston, we look forward to developing bridges of culture, education and innovation between our students and our culture institutions and entrepreneurs in the future.”

Commenting on the business seminar, Sheikh Fahim Al Qasimi expressed his pleasure of collaborating with the UAE Consulate and Invest in Sharjah in organizing the Sharjah Boston Business Seminar, saying: "We aim to boost our business relationships, and I am very pleased to witness the recently growing activities between the two sides".

He noted Invest in Sharjah have been spearheading their collaborations with public institutions and private companies, to help guide businesses, and facilitate investment growth across all sectors with a focus on Travel & Leisure, Transport & Logistics, Healthcare, Environment, Education and Light Manufacturing.

During a detailed presentation on the investment opportunities in Sharjah and the potential that lies for Boston and the larger community of American investors, Al Musharrkh said: “With shared interests and common values, the UAE and US are close friends and strong partners.

Thanks to our open economy, attractive business environment and continued economic growth, the UAE and Sharjah have emerged as a key international trade hub between East and West.

He continued: “Sharjah boasts one of the most diversified economies in the Arab world, and with capital inflows coming into leisure and tourism, environment, healthcare and logistics, financial services, and notably, education sectors, the emirate recorded FDI inflows worth $1.63 billion last year – significantly higher compared to 2016 figures.”

He explained: “Similarly, Boston contributes nearly $5 billion to the US economy annually, and is among the world’s 30 most economically powerful cities in the world. One of the main drivers of progress on both sides is the education sector, and we see unlimited potential for partnerships in this sector in both economies.”

He noted: “As one of the primary facilitators of international trade and investments between the UAE and the world, and Sharjah in particular, Invest in Sharjah has hosted this high-level business networking seminar to highlight new and emerging investment opportunities to our American friends and counterparts.”

Ideal Sharjah Sectors for US Outbound Investments in MENA

Leading the entrepreneurial opportunities in Sharjah, and sharing the emirate’s commitment and dedication to support start ups and SMEs from all around the world, Her Excellency Najla Al Midfa, CEO of the Sharjah Entrepreneurship Centre (Sheraa), said: “We are honored to be part of the Sharjah Delegation to Boston – this is an important step towards expanding Sharjah’s relations with global talent hubs. Meeting with other like-minded organizations, sharing our experiences and exploring opportunities for collaboration is all part of Sheraa’s strategy to build a global network of resources that our entrepreneurs can benefit from.”

She continued: “We would like to take this opportunity to thank the Department of Government Relations for arranging this trip. We would also like to thank Invest in Sharjah for the insightful and collaborative Sharjah Boston Business Seminar, that set the tone for future conversations between our two cities.”

On his part, His Excellency Hussain Mohammed Al Mahmoudi, CEO of the American University of Sharjah Enterprises (AUSE) and CEO of the Sharjah Research, Technology and Innovation Park (Sharjah RTI Park), said: “Our visit to the city of Boston is one of the most significant opportunities for us at AUSE and SRTIP. During the visit we were able to present US-based investors and business leaders on the diverse opportunities Sharjah has to provide in the fields of education, technology and innovative projects.”

He added: “The Sharjah Boston Business Seminar was also a key platform for us to present investors the diverse range of investment projects especially in a free zone environment, where regulations and processes are more streamlined, practical and provides strategic incentives for US businesses to expand their networks in the region.”

HE Khaled Al Huraimel, Group CEO of Bee'ah said, "I am honoured to be a part of this esteemed delegation to Boston, and would like to thank Sheikh Fahim Bin Sultan Al Qasimi, Executive Chairman of the Department of Government Relations, and the Invest In Sharjah team, for creating an opportunity for us to connect, and encourage an onging discourse with industry leaders and experts at Boston.”

He added: “Boston’s national leadership in innovation, sustainability, education and research, is closely aligned with Sharjah's interests as a pioneer for sustainable economic development in the Middle East. In addition to strengthening bilateral relations, this visit has offered new perspectives towards the development of our shared interests, and offered prospects to build on our complementary strengths."

Danny Sebright welcomed the opportunity to deepen bilateral trade ties with Sharjah noting that the UAE has been the strongest ally of the United States in Middle East and North Africa (MENA), and the region’s largest exporter to the US. He agreed with Al Musharrkh’s observation about the potential that lies in enhancing economic cooperation in the education sector and explore ways to develop knowledge exchange channels and a mutually beneficial relationship, given Sharjah and Boston have played a leading role in shaping and delivering academic expertise to its respective communities.