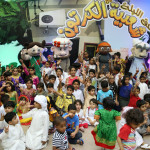 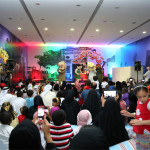 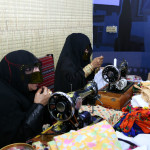 Through a show for the first time in Sharjah The Heart of Sharjah, one of Shurooq’s largest tourist and heritage projects, hosted a fun-filled stage show for children by Shaabiat Al Cartoon. Performed for the first time in Sharjah, the show formed part of the Hag Al Laila celebrations held across the Emirate to mark the arrival of the month of Ramadan. Children and their parents enjoyed watching the three comic shows that were hosted at Dar Al Nadwa in the Heart of Sharjah as part of activities held to preserve and instil Emirati traditions into the hearts of the younger generation. The celebration aimed to familiarise participating children and their parents with Hag Al Laila, the night of Mid-Shaaban, and UAE’s folklore, traditions and customs, in an exciting way, and gave children the chance to enjoy and interact with the show’s lovable cartoon characters, Shambi, Bu Mheir, Attoqah, Afari, from the widely popular TV series Shaabiat Al Cartoon. Yousif Al Mutawa, Heart of Sharjah Manager, expressed his pleasure at the success of the first Hag Al Laila celebration that took place in the Heart of Sharjah, as well as at the overwhelming response from children and their parents who enjoyed watching the stage show. “We were eager through this event to familiarise visitors to the Heart of Sharjah with the UAE’s true heritage and traditions and the heritage value of this area, and to promote it as a tourist and heritage destination hosting activities and events throughout the year, while offering a leisure and educational fun atmosphere for the whole family,” Al Mutawa said. Emphasising the symbolism of Mid-Shaaban, Al Mutawa said, “Hag Al Laila celebrations have a great significance in the UAE as this night serves to promote traditions and customs among children and give them a chance to enjoy a similar atmosphere as experienced by their grandparents. Our celebration is in line with our eagerness to mark social and heritage occasions and to preserve Emirati traditions and instil them in the hearts and souls of the younger generation.” Haydar Mohammed, General Manager of Fenner Production and Director of the popular cartoon series, said: "We are truly honoured to be part of this event in the Emirate of Sharjah. We thank the Organising Committee for inviting us to share the celebration of Hag Al Laila with them with this show, specifically staged for children and their families, as it was the first time for us to perform in Sharjah.” Meera Taryam, Director - Environmental Services and Education at Bee'ah, said, “We seek to promote ecological awareness and community engagement in activities and programmes that we organise with a view to raise awareness about the importance of preserving the environment. This is the reason why we participated in the Hag Al Laila celebrations in the Heart of Sharjah, through which we strived to promote the concept of environmental awareness among larger segments of the society, in order to help create a more aware and conscious society. Our key goal is to bring about positive changes in new and innovative ways by working with all organisations and institutions.” Amina Ahmed Al Shaib, Chairwoman of Dubai Cooperative Association for Productive Families, reaffirmed that the association cares about Emirati families and seeks to engage them in all national events that contribute to highlighting the UAE identity. She added: "The association expresses the authenticity of our community and its identity and values, and thus it is normal for us to be part of the Hag Al Laila event, organised by the Sharjah Investment and Development Authority (Shurooq), represented by its landmark project the Heart of Sharjah. We take this occasion to thank the project's management for inviting the association and some productive families to participate in the event by making gift bags for Hag Al Laila." The celebration also included a variety of heritage and awareness workshops that saw an overwhelming response from children who got the chance to learn more about topics such as the UAE's rich heritage and culture and the national identity as well as how to design and make beautiful heritage products, as they engaged in workshops conducted by the Dubai Cooperative Association for Productive Families. The visitors also saw how the bags of “Hag El Laila” were made by ladies that were living in the old past. The children had the chance to choose their own fabric and the bags were specially made for them. Meanwhile, the Sharjah Environment Company (Beeah) organised a workshop on recycling with a view to preserve the environment and raise ecological awareness among children, in the presence of the character “Khadoor” between children that took memorial pictures with the visitors. Hosting the celebration in the Heart of Sharjah enabled visitors to explore the area with many visiting heritage places and historical and tourist landmarks, including mosques, museums, special areas and centres and traditional souks on an unforgettable journey back in time to the 1950's and allowing them to experience what Sharjah was like over half a century ago. Scheduled for completion by 2025 and situated in the district of old Sharjah just five minutes from the city’s Corniche and 10 minutes from the Sharjah International Airport, the Heart of Sharjah will feature diverse commercial, cultural and residential projects, including a boutique hotel, restaurants, retail shops, art galleries, traditional and contemporary markets, archaeological sites, museums, play areas, and commercial offices. The Heart of Sharjah was recently registered in the tentative list of World Heritage Sites by the United Nations Educational, Scientific and Cultural Organisation (UNESCO), an impressive achievement that affirms the significance of archaeological and historical heritage in the UAE. Once listed as the UNESCO World Heritage Site, the international organisation will protect the site and help with maintenance when needed. In addition, as a UNESCO listed world heritage site, the Heart of Sharjah will be introduced, promoted all over the world and positioned on the world tourism map.
Back to media
Share this article: Twitter

During H.E. Noura Al Kaabi, Minister of Culture and Youth in the UAE, visit to “Malamih – Faces,Phantoms, and Expre… t.co/CvHc0BQ4xe

Sharjah Investment and Development Authority (Shurooq) is gearing up to cross a brand new milestone in its journey… t.co/2dmiXQB27q