Innovation and Technology under the Spotlight at Sharjah FDI 2017 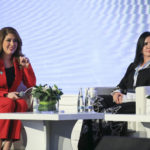 Innovation and technology were the subjects under discussion during the final panel sessions on the opening day of Sharjah FDI Forum 2017, which concluded yesterday (Wednesday) at the Jawaher Reception and Convention Centre, Sharjah. The two-day global investment forum was held under the patronage of His Highness Dr. Sheikh Sultan bin Muhammad Al Qasimi, Supreme Council Member Ruler of Sharjah.

Highlighting the role of the government in being instrumental in driving innovation, Bashar Al Natoor, said: “My view is that innovation has been around since man has been on the earth, however it is now something that is a process as opposed to something that is done individually. A good example is the United States Department of Defense. They are a military body but they are behind the GPS, the Internet and NASA – they were responsible for putting a man on the moon. All this technology has filtered into the corporate sector, so you can see the influence of government bodies in the process of innovation.”

Outlining his company’s involvement with the public sector, Tayfun Topkoç described how Public Private Partnerships (PPP) were at the core of his relationship with a Sharjah quasi-government body.: “Governments are more and more looking for citizen-centric services and this is something we at SAP are doing with Bee’ah, the Middle East’s fastest growing environmental management company. We developed their digital platform that is helping to detect counterfeit drugs. Through our relationship we have found that the platform can also be applied to counterfeit luxury goods, so we are likely to be able to extend our relationship with the government through this application,” he said.

Representing the government sector on the panel, Marwan Obaid Al Muhairi revealed how public sector bodies come under the same pressures as commercial organisations when it comes to expectations of innovative services. He also highlighted the extent of Ajman government’s e-services: “When Apple announced that there would be a delay to their newest i-Phone it affected their share price. We experience the same issue in the government – when citizens hear about the latest government services they expect to be able to access them straight away. At the moment about 60 per cent of our government services are e-services,” he said.

Discussing regulations around innovation, Walid Hareb Al Falahi said: “The main issues relating to the advance of technology are ones of privacy because of all the data now being collected and safety. I am working in the field of drones - what if one falls out of the air and injures someone? Areas such as 3D printing throw up new regulation issues all the time. You have to keep regulating as you develop – you can’t just sit at home and refuse to progress just because you don’t have the necessary regulations in place right at that moment.”

The final panel discussion of day one of the third Sharjah FDI Forum shone the spotlight on Blockchain – the software platform that made one of its outcomes, the Bitcoin, the world’s most successful decentralised digital currency. Titled ‘The New Tech in Trend: Blockchain,’ the discussion started with how blockchain began as a mere book keeper for the Bitcoin system but is now developing into a secure information recording system with a huge potential to grow and develop.

“The blockchain architecture is beyond the hype dimension. The question is no longer about ‘whether’ it will go mainstream and ‘if’ it will be implemented, but ‘when’ and ‘how.’ I see more positives attached to it than negatives. Blockchain possesses the same potential as the Internet did when it was introduced in the early 1990s,” said Dr. Al Arabi.

Describing blockchain as a protocol for trust, Mr. Stewart remarked: “Blockchain is a way of establishing trust between individuals and groups or companies, so they can do business in a less risky way. By removing risk from transactions you negate the need for the intermediary or the middleman. Smart contracts and other new technologies supported by blockchain have the potential to completely transform the way the world has been engaging in business, society, culture, profession and more in the future.”

On being asked about regulations missing completely from the world of blockchain and its first success, Bitcoin, and whether introducing them will benefit the former, Mr. Weynand Kuijpers observed: “There is definitely an opportunity for governments to be involved in blockchain. There is still a degree of resistance to new innovative technologies by countries that have been very well organised for a long time, as compared to developing nations who are readier to quickly adopt such changes.”

Mr Tripathi commented: “Blockchain is driven by consensus. Let’s take fire security sensors in a factory, for example. There will be a fire sensor, a heat sensor and perhaps a light sensor that will collect data under the blockchain system and send it to a centralised system, which will then decide how to react to a fire situation based on the collected data. In the same way you can have consensus between businesses, governments, education and other areas that need to trust information without having to ask people for it.”

Mr. Stewart said the education sector will benefit tremendously in the next 10 to 20 years if integrated with blockchain. He cited a recent example of 1,500 teachers that were recruited across 46 branches of GEMS in the UAE who were shortlisted from 40,000 applicants. He highlighted that without blockchain there would have been no way of trusting their qualifications except attestations from their countries of origin – a process that would have been both time consuming and expensive.

“If the qualification is initially registered within the blockchain by a trusted authority, from that point on, anybody that needs to know about that person’s qualification has access to a trusted information source. That speeds up the recruitment process by taking out several lengthy steps from the equation. This can be hugely beneficial for the education sector in the UAE,” he said.

The panelists spoke about blockchain within the context of cybersecurity, pointing out that this system benefits from replicating information several times – a mechanism that increases the reliability of the information. They also discussed the effect on professions such as accounting, auditing, banking and law that the growth of blockchain would have.

Organised by Sharjah Investment and Development Authority (Shurooq) and Sharjah FDI Office (Invest in Sharjah), in conjunction with CNBC Arabia, the third edition of the Sharjah FDI Forum was titled ‘The Fourth Industrial Revolution’ and assessed the impact that current and future technology is having and is likely to have on the global investment landscape.

Sharjah FDI Forum 2017 featured a stellar line-up of thought leaders, global economy experts and senior executives from the public and private sectors. The event attracted hundreds of corporate business leaders, public sector representatives and government officials from the region and beyond who attended to find out about the latest trends and developments affecting the future of investment in the UAE.