Focus on Sharjah as key investment hub at Paris conference 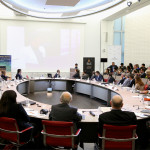 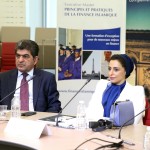 Event held under the patronage of Shurooq Chairperson Bodour Al Qasimi and attended by over 300 investors The Sharjah Investment and Development Authority (Shurooq) has participated in a two-day conference on the Middle East and North Africa (MENA) region as a new source of opportunities for French SME’s in Paris, France. The conference, which took place on the 19th and the 20th of May, was organised by the Franco-Arab Chamber of Commerce, Arab Business Leaders, IPEMED and the Paris Dauphine University, and focused on how French SMEs can succeed in the MENA region as well as on how Arab investors can support French SMEs’ growth. The conference’s activities were held under the patronage and presence of Sheikha Bodour bint Sultan Al Qasimi, Chairperson of Sharjah Investment and Development Authority (Shurooq) and were attended by HE Mohammed Meer Abdullah Al Raeesi, UAE Ambassador to France, Arnaud Raynouard, Vice president of Paris Dauphine University and Dr. Saleh Al Tayar, Secretary General of Franco-Arab Chamber of Commerce. Shurooq’s delegation was led by Sheikha Bodour bint Sultan Al Qasimi, Chairperson of the Sharjah Investment and Development Authority (Shurooq) and included HE Marwan bin Jassim Al Sarkal, CEO of Shurooq; Elie Armaly, Director of Business Development at Shurooq; Amani Al Ali, Manager of the Executive Office of Sheikha Bodour bint Sultan Al Qasimi; Hatem Heidar, Public Relations Executive, and Maryam Bin Al Shaikh, Business Development Coordinator at Shurooq. The conference was attended by top business organizations, companies, political institutions and diplomatic bodies in France to encourage secure international economic relationships. A gathering of 300 senior business executives have met to discuss ways of investment in the MENA as new sources of SMEs, particularly in the GCC region. In her keynote speech during the conference, Sheikha Bodour bint Sultan Al Qasimi, Chairperson of Shurooq, highlighted some aspects of the relationships between France and the Arab World, stressing the need to build strong relationships based on mutual exchange and trust; such goal that requires a lot of time, effort and perseverance from all parties. Sheikha Bodour Al Qasimi added: “Our civilizations, European and Arabs, are different, but also complementary in many respects. And while our legal, political and economic environments may differ, I am here today to assure you we will do everything in our power to help you overcome any obstacles in order to succeed in Sharjah’s thriving economic environment.” Shurooq’s CEO, HE Marwan bin Jassim Al Sarkal, engaged in a panel discussion to promote Sharjah's offering to France. Focusing on the core of the event, the MENA region as a source of opportunities for French SMEs, he said: “The MENA region is undoubtedly one of the most important SME regions. In the fast growing economies of this region SMEs account for the largest majority of enterprises as well as a very high share of private sector employment, and there is still a great deal of room for growth, which means there are many opportunities waiting to be leveraged.” Al Sarkal added: “It is Shurooq’s mandate to foster economic, cultural, and social development and, within this framework, it is the small to medium enterprises that form the foundations that allow bigger projects and companies to prosper. As such, we are concerned with sustainable development and with encouraging businesses to take a more active role in developing the private and SME sector in the Emirate. To this end, the Authority has made it a key mission to support small and medium enterprises and to encourage entrepreneurship by making available a range of opportunities, facilities and incentives, as well as providing a safe and supportive trading environment.” Houssam Nasrawin, President and founder of Arab Business Leaders, echoed Al Sarkal by mentioning that: “Sharjah is a fast growing Emirate offering a lot of opportunities for French companies. Today’s event in Paris, under the patronage of Sheikha Bodour Al Qasimi highlights how Sharjah and the UAE look to establish strong business relations with Europe.”  Shurooq’s roadshow in Paris has commenced with face to face meetings between selected interested companies and the various present institutions. Shurooq’s delegation has also attended a reception held in honour of the conference’s Emirati guests at the reputable Fouquet’s Barriere Hotel, and was attended by top business decision makers and political leaders, and provided the networking platform for its VIP guests to convene. The French presence in Sharjah was examined, acknowledging Schneider Electric in the energy sector, Accor Hotels, the French International High School Georges Pompidou, scientific contributions from the French to the Sharjah Museum, and the MENA Economic Forum in France 2013 to name but a few. Mention was made of French representation the UAE, with emphasis on The French Chamber of Commerce, the French Trade Commission in the UAE, the more than 1000 French companies trading in the UAE, and 11 of the largest Emirati companies invested in a vast array of France’s diverse sectors, including aviation, tourism, banks, finance, building ships, properties, developing and operating industrial zones, and the food industry. Shurooq was established in 2009 with the aim of achieving social, cultural, environmental and economic development on the basis of Sharjah's distinct Arab and Islamic identity, and to encourage investment by adopting the best international standards in providing quality services that help attract investors from the region and the world. The Authority’s key mission is to provide facilities and incentives to help overcome obstacles facing investment activities in the Emirate, evaluate tourism and investment related infrastructure projects, and lay down the necessary plans to complete such projects. In recognition of its overall accomplishments, Shurooq was named The Banking Awards 2013 - FDI Agency of the Year in the MENA region, in The European’s Global Banking and Finance Awards.
Back to media
Share this article: Twitter