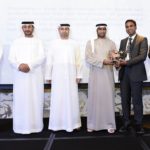 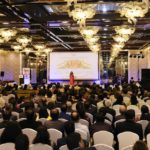 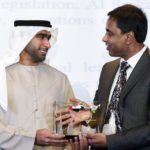 Marwan bin Jassim Al Sarkal spearheads subcontinent investments His Excellency Marwan bin Jassim Al Sarkal, CEO of the Sharjah Investment and Development Authority (Shurooq), was awarded with the Golden Friends of India Award in recognition of his pivotal role in promoting economic and investment relationships between Sharjah and India. Mohammad Al Musharrkh, Director of the Sharjah FDI Office (Invest in Sharjah), received the iconic award on behalf of His Excellency. The award, from the Indian Business and Professional Council (IBPC), was seen as a mark of acknowledgement and appreciation from the Indian business community for His Excellency’s tireless efforts in fostering private and public investments. India is Sharjah’s first non-oil trade partner and home to a large portion of the overall Indian investments in the UAE, worth AED 183 billion (USD 50 billion). It is also home to 7000 Indian companies. The IBPC, which operates under the umbrella of Dubai Chamber of Commerce and Industry (DCCI), presented the award at a ceremony in Dubai in the presence of a number of representatives of the UAE government, as well as a host of businesspersons and prominent figures from India and the UAE. His Excellency Marwan Al Sarkal extended his gratitude to the IBPS, and expressed his appreciation for receiving the Golden Friends of India Award. He said: “There is a very special historic relationship between the UAE and India that has grown culturally, economically and commercially, generation by generation. We are both nations who have succeeded through our own efforts and created dynamic economies through our own self-belief, and the increased rate of trading between the two countries is a testament to our triumphs. The thousands of Indian companies, investors and businesspeople who are based in the UAE constantly emphasise that it is one of the prime locations to live, work and invest.” The Sharjah Investment and Development Authority (Shurooq) seeks to promote Sharjah as a trade, tourist and investment platform. It works to facilitate the investment process for all investors, company-owners and businesspersons in addition to linking them with proper investment opportunities.
Back to media
Share this article: Twitter

In line with the preventive measures against Coronavirus (COVID-19), and according to the regulations and directive… t.co/m1qIkg6Byv